Fraser Island Ferry runs from River Heads to Wanggoolba Creek. The ferry run very frequently and bookings (while required) seemed pretty lax. We showed up a bit early, and got offered a spot on an earlier ferry.

The ferry was ~$170 return, including a vehicle with two people.

Fraser Island is both accessible and sufficiently remote. While we stayed at the most popular camp site (Central Station), since we weren't sure about island driving conditions or weather, in the future we will definitely stay at one of the more remote, beach campsites.

Central Station has washing stations and coin-operated hot showers. Neither of us had the courage to try the showers (it's only four days, and swimming in the lakes is cleaning enough). 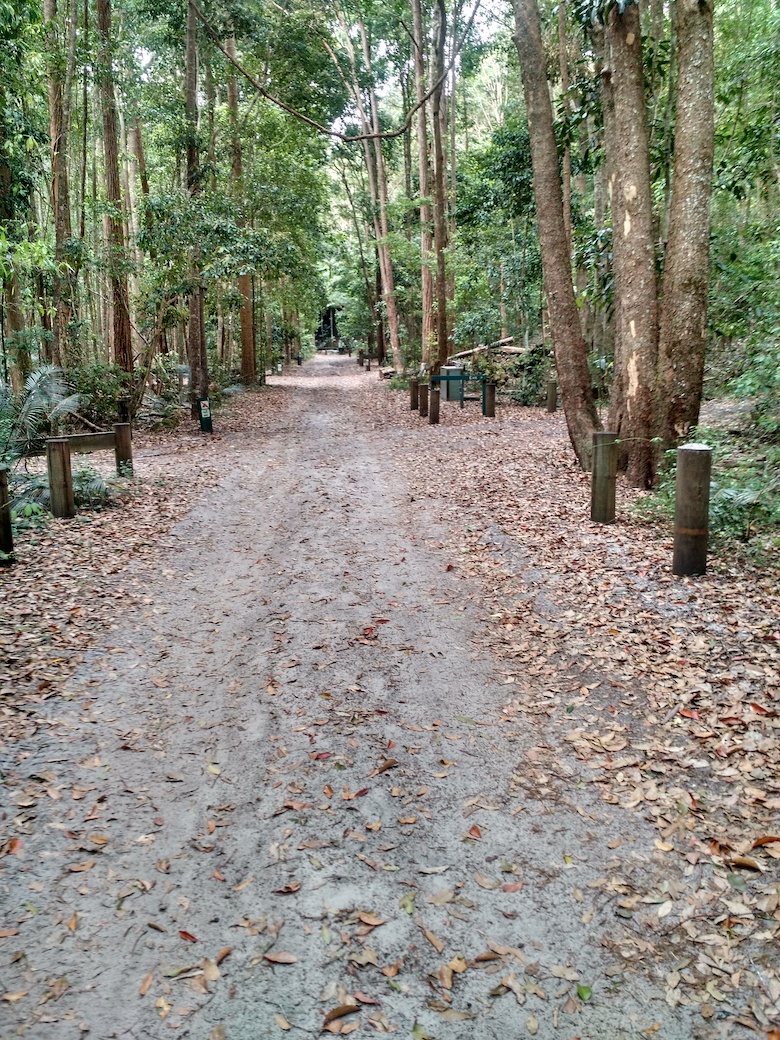 Before arriving, we were very concerned that the tracks on the island would be challenging for the Hilux, and were concerned that we didn't have enough recovery gear.

This concern was overblown. Tracks are slightly worse condition than the average fire-trail in the Blue Mountains, with some occasional medium-deep holes. The sand on the tracks was relatively firmly packed, and only on a few occasions did we risk getting bogged. High clearance and low-range are, nevertheless, a necessity.

It rained for a few days before our visit, and I was concerned that mudslides and washouts might make some tracks trickier, but since all of the tracks are sand, the rain improved driving conditions rather substantially. After several days of dry hot sun, there was a marked difference in navigating the tracks. Nevertheless, nothing tricky.

While we were concerned that the island would be super busy over the weekend, even then it was not hard to find hidden spots away from the crowds. Lake McKinsey was, unsurprisingly, busy. Even so, with a bit of initiative and 15 mins of walking we found a spot on the beach secluded enough to be comfortable skinny dipping.

We saw several of: 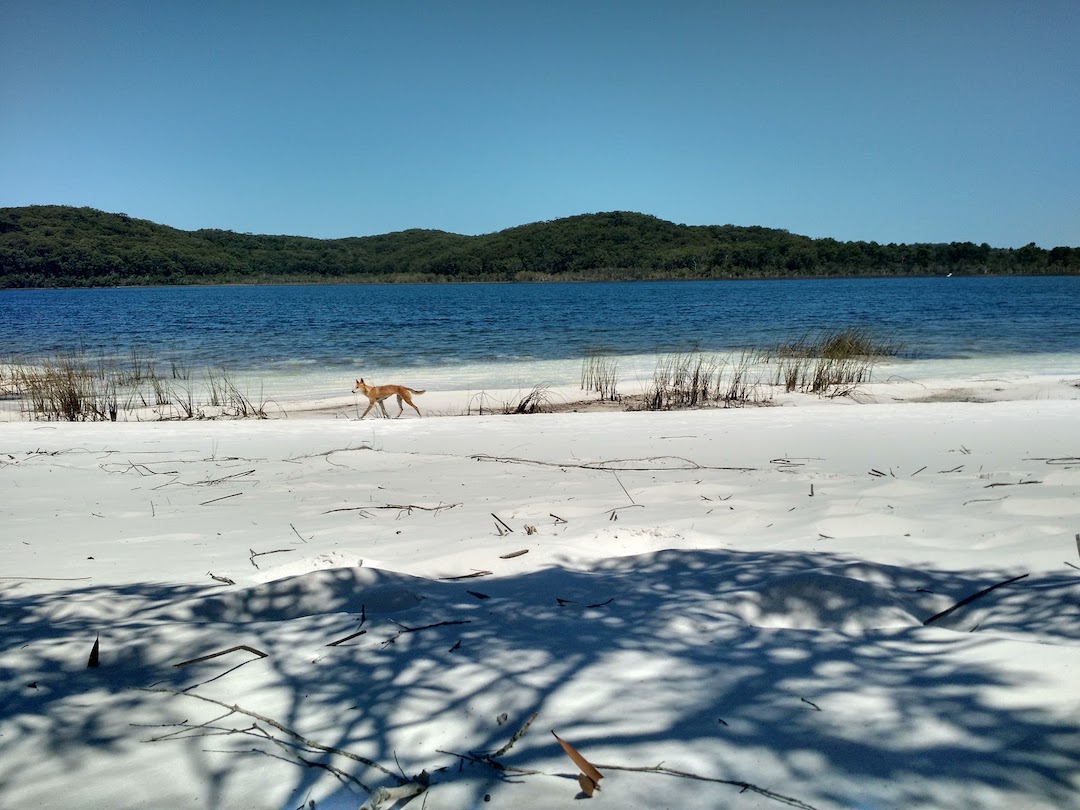 We arrived early at the River Heads ferry terminal. After deflating tyres and making sure that everything was packed and secured, we enjoyed the remainder of an audio book while waiting for the ferry.

After it arrived and the vehicles started to disembark, the very first ute was backed into by the second ute. The set us with great confidence for the ferry. Remaining highlights included the last minute addition of a septic truck, and a Land Cruiser driving onto the ramp as the ferry was pulling away. Somehow we arrived safely.

Just after touching down, we headed straight to camp to get a lay of the land. We had considered sleeping in the back of the HiLux, but since we couldn't reserve a spot that way decided instead to pitch tent.

After putting bedding and other essentials in the tent, we decided to head straight to Lake McKinsey to see what all the fuss was about. The carpark was about half full, and snags were on the grill. We slapped together some PB&J sandwiches and snarfed them down.

The entrance to the lakeside was packed with kids and families, but walking 15-20 minutes in either direction. We went east and quickly found a place where we could swim in relative quiet.

After a cheeky skinny dip, we went on the hunt for a good fishing spot and decided we'd check the Ungowa campsite (supposedly "an angler's delight"). After losing half a dozen hooks (it's been awhile since I've fished!), and rigging a swivel-sinker-bait setup incorrectly, we decided the sand fleas were too much and headed back to the car. At least the solider crabs were interesting.

As we came up over the crest of the beach to the campsite, we saw a dingo digging around looking for food. As soon as he saw us, he trotted off and we made for the car and then to camp for the night.

Though we'd brought some instant coffee, we decided to check out Kingfisher Bay resort and see if we could beg a flat white off someone. After our cuppa, we headed out to the pier, and discovered a surprisingly good fishing spot.

After breakfast and fishing we headed off to Lake Birrabeen, which ended up being our favourite of the inland lakes. Just as beautiful as McKinsey, but completely empty save for the dingo that trotted past while we were sunbathing. 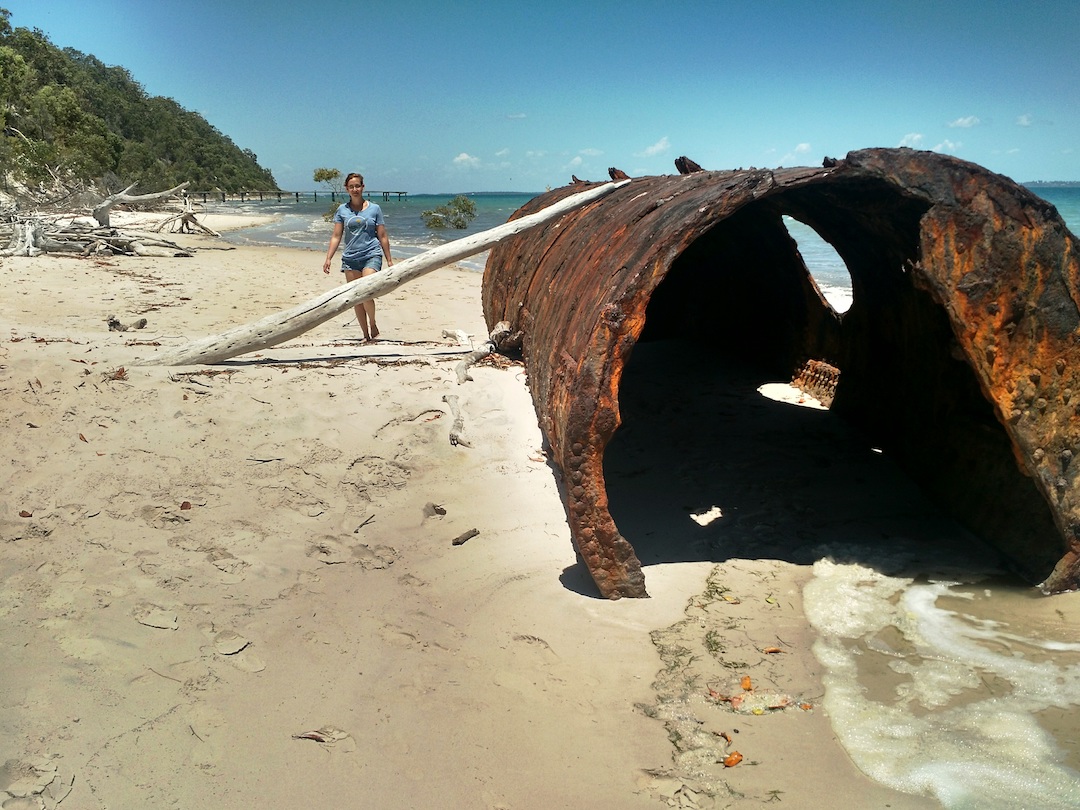 Repeated the previous mornings fish/brekkie at KB pier. We managed to catch a Pikey Bream juuuust at the legal size, as well as a couple smaller fish. We kept the Bream for dinner.

We spent the rest of the day searching for better fishing spots. First stop was McKinsey Jetty, which photos had led us to believe would be a proper pier. No such luck, it was old and falling apart. The brave and balanced could climb out to the end, but we decided we were neither.

Nevertheless, there was enough to see nearby, including aborignal painted tree trunks, and some rusting old machinery on the beach.

As the day got hotter, we headed inland back towards Lake Birrabeen, but before getting there, found someone trying to navigate the island in an old RAV4. They stopped as we pulled over to ask directions, and promptly bogged themselves. In the middle of the road.

We did our best to get them out, but the sand tracks and shovel didn't cut it. Besides, it's not clear how they'd get much more than another 100 metres without getting bogged again.

After an hour or so of trying, a Patrol with a winch pulled up, and started having a go at the driver of the RAV4 saying he'd already warned him not to come to the island on it. There wasn't much more we could do, so we left them to it.

By this time it was really hot, and we decided to head back to camp to read and cook up the Bream. 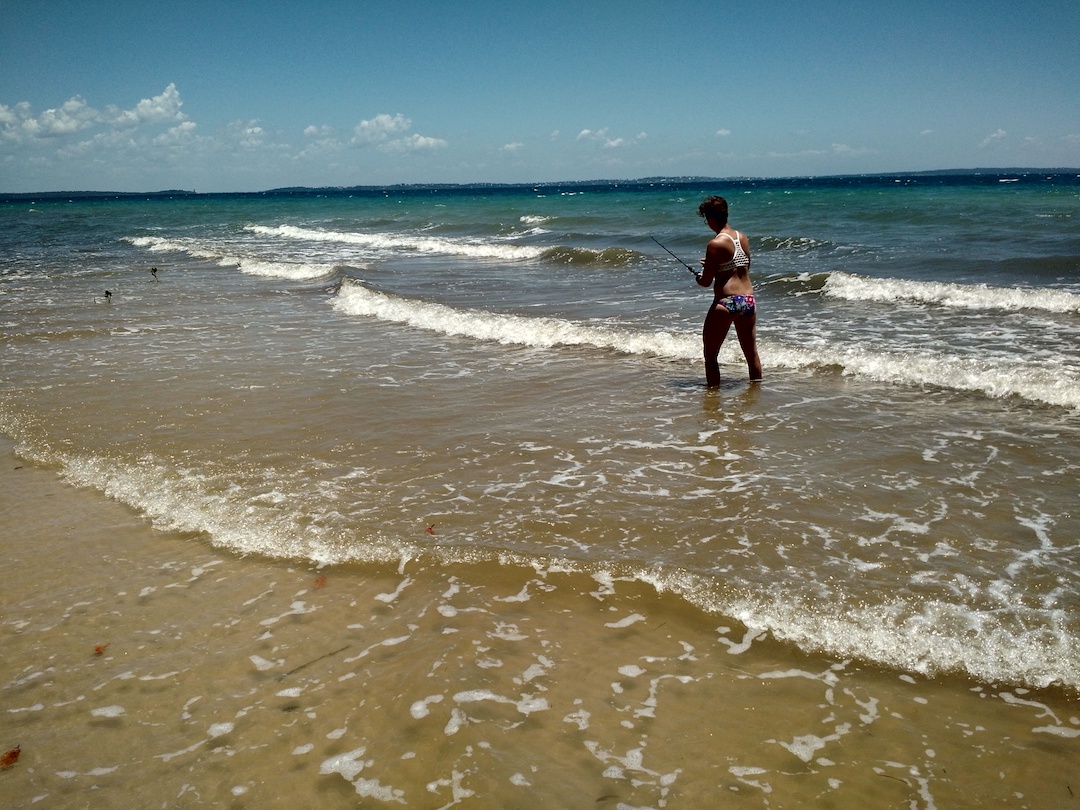 Due to severe mosquito issues, we headed straight to the ferry wharf in the morning where we fished and waited for the ferry. A lazy ride back to the mainland concluded our trip.